We are pleased and honored to announce the results of DEF CON CTF 2016. 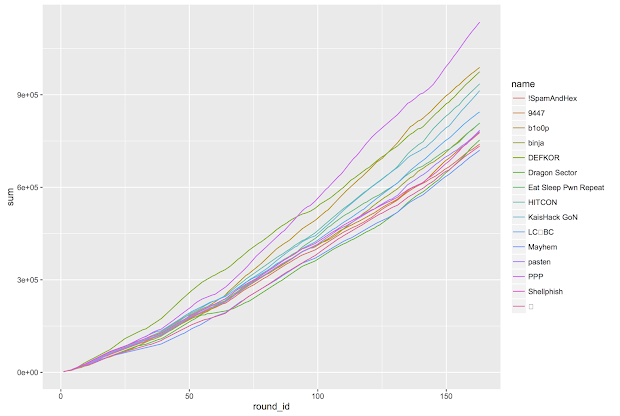 Congratulations to our top three teams PPP, b1o0p, and DEFKOR. We would also like to congratulate all competing teams for spectacular performances all around. This year’s game was a drastic departure from previous DEF CON CTF games, and we appreciate the sacrifices you made to compete in it. Finally, we would in particular like to congratulate Mayhem, from For All Secure, for their spectacular performance as the first autonomous computer system to play DEF CON CTF. While Mayhem did finish in last place, many times throughout the game it was able to pull ahead of human teams.

At DEF CON, we noticed that contrary to what was communicated to some teams, proofs-of-vulnerability (PoVs) were not being re-run in successive rounds after submission. Since this was an error on our part, we committed to fixing them up after the fact, which took longer than expected.

In the coming days, we have more data we will be releasing:

Once again, thanks for everyone who helped make DEF CON CTF a reality this year: our fifteen finalist teams, everyone who played in qualifiers, DEF CON goons, DEF CON staff, and the CTF community around the world. See you in 2017!